Summer winding up (down?)

Today we went to the New England Aquarium since this is the last week of summer vacation. The little guy had a good time, I think--he seemed to enjoy looking at the fish; he even touched some in the shark petting tank (!). Unfortunately, we didn't get any pictures because it was too hard to manage. Guess this is something we'll have to learn to do--my dad managed to take pictures of my brother and me when we were little.

I managed to get some things written this summer--mostly on this blog, but I also contributed a post about A Pail of Oysters to the Asian Books Blog. In addition, I was interviewed for an article in the Monroe News about the republication of Oysters. I would have liked to get more done on an article about George Kerr that I've been working on for about three years, but I'm still not sure where it's going. I've sort of written myself into a corner with it. I might post a blog entry at some point in the near future about some issues related to the authorship of Formosa Betrayed and the chronology of its publication, updating this post I wrote about 6 1/2 years ago (!). But right now I have more questions than answers on that front.

My main goal for the semester (besides to teach well) is to maintain my own writing schedule so that I can maintain some momentum in the midst of everything else in life. Wish me luck!
Posted by Jonathan Benda at 10:53 PM No comments:

I already had Harry A. Franck's A Vagabond Journey around the World (1910) and Roaming through the West Indies (1920), but I've been wanting to get Glimpses of Japan and Formosa (1924) for awhile. 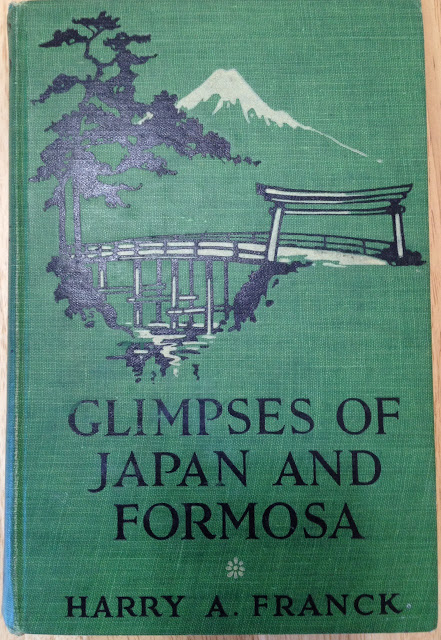 I did a little Googling research about the book and found a few reviews that came out around the time the book was published. The reviews were mixed. A couple were relatively positive:
The others that I found, however, were quite critical of Franck's book:
While I admit that my search for reviews only scratched the surface, what struck me about these reviews was that three of them were from academic journals. It was surprising to me that, for instance, The Geographic Journal would take Franck's travel writing seriously enough to review Glimpses of Japan and Formosa. I don't imagine an academic journal in geography or political science nowadays would devote space to reviewing, say, Paul Theroux's The Happy Isles of Oceania.

I did find some more recent scholarship that made use of Glimpses, though. Rachel Snow, in a 2006 dissertation on "vernacular photo-travel books," uses some images from the book although it appears that the bulk of her discussion of Franck is based on Roaming through the West Indies. Paul Barclay, in his 2010 article on "image-making in Taiwan under Japanese colonial rule," cites Franck in a couple of places, but he doesn't analyze the book in depth.

Finally, I'd note that Franck's descendants have developed their own website about the travel author. It shares some information about his biography and his service in the Second World War.
Posted by Jonathan Benda at 7:36 PM No comments:

Brush with history: My father's photos of the May 19, 1946 Tokyo food demonstrations

My late father went to Tokyo as a member of the MacArthur Honor Guard at the beginning of the U.S. Occupation. He was, as I recall, experimenting with photography at the time and took many pictures. My wife and I are scanning some of photo albums, and I thought I'd share some pictures that might interest my reader(s). 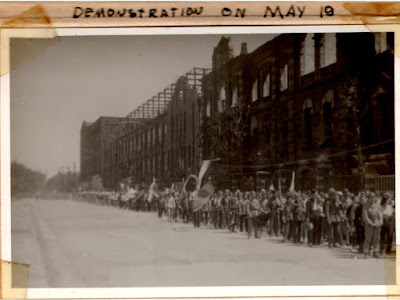 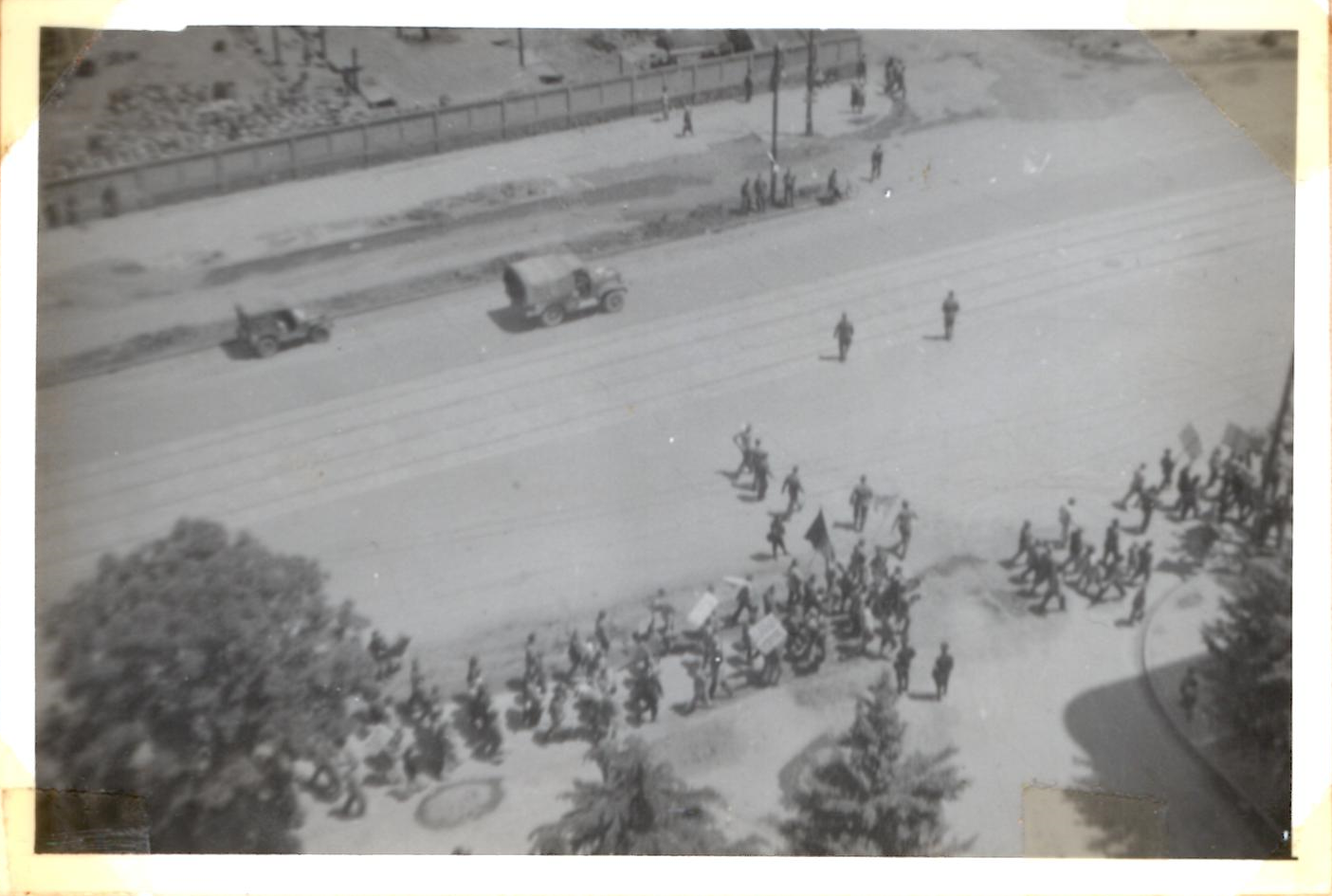 A diary excerpt by Mark Gayn (collected in The Cold War: A History in Documents and Eyewitness Accounts, edited by Jussi M. Hanhimäki and Odd Arne Westad) describes the demonstrations as follows:


The political pot is boiling madly. [Prime Minister] Yoshida is still struggling to form a new cabinet. As fast as he picks his ministers, it is discovered that they are war criminals subject to purge. Meanwhile, the food rationing machinery has bogged down. In the far north the distribution of food is thirty days behind schedule; in Tokyo, twelve. There are street-corner rallies, parades, mass meetings of protest. On Tuesday, eight hundred people demonstrated before the palace, demanding to know what the emperor was eating. On Friday, there were eight "food demonstrations" in front of rationing stations. Yesterday, twenty. There is a steady stream of marching men past the Diet and the premier's residence.

The climax came today with a "Give Us Rice" mass meeting. By ten o'clock on this bright, warm morning, there were at least 60,000 people at the imperial plaza. They had put three trucks together, and mounted tables on them for the speakers' platform. The chairman was the head of the Transport Workers' Union. But the meeting was actually run by a hard-looking man in corduroy knickers and a sports jacket. This was Katsumi Kikunami, an editorial writer for the Asahi, head of the Newspaper Union, and founder of the huge Congress of Industrial Unions. Grimly, he introduced a succession of speakers--union leaders, political workers, and just plain people.

One of these was a housewife of thirty-five, slim and plain-looking and obviously undernourished. She came from a ward in which there has been no rice distribution in two weeks. She had a child strapped to her back, and as she denounced the police and the rationing officials, the child's wailing came clear and loud over the loudspeaker.

But most of the speakers talked of politics. They demanded Yoshida's resignation, a Popular Front, a new cabinet including workers and farmers. "We must use the privileges we've gained since the war," cried Suzuki, editor of the Yomiuri, "One of them is the right to make revolutionary changes that will produce a democratic government. A one-day general strike will force Yoshida out!"

Tokuda was the last to speak. He wheeled around on the table top, pointed at the palace, and shouted: "We're starving. Is he?" He denounced Yoshida and the war criminals in the Diet, but he saved his sharpest barbs for the emperor. "Last week," he said, "we went to the palace and asked to see the emperor. We were chased away. Is it because of the emperor can say nothing but 'Ah, so. Ah, so?'" He mimicked the emperor. The crowd cheered wildly (...)

There's more in the book, including General MacArthur's response to the protests, which, as Gayn's diary suggests, were attended by ordinary people, labor leaders, and more radical left-wing elements. In Embracing Defeat: Japan in the Wake of World War II, John Dower argues that the Americans occupying Japan after the war "contributed unwittingly to the circumstances in which such radical activities flourished by deciding to promote political freedom and social reform without taking an active role in rehabilitating the economy." MacArthur's response to the demonstrations "chilled the popular movement," writes Dower, although "it certainly did not freeze it." Later on, Dower writes that eventually,


[i]n the summer of 1948, MacArthur reversed occupation labor policy by withdrawing the right to strike from public employees, who commonly were in the vanguard where miserable pay, layoffs, and radical unionism were concerned. Simultaneously, occupation authorities worked diligently behind the scenes to promote the emergence of a virulently anticommunist "democratization" (mindo) movement within organized labor.

By that time, however, my father, having been honorably discharged, was back in the U.S. and beginning the next chapter of his life. (Which also involved photography!)

My wife and I are scanning and organizing some of my late father's pictures from when he was in the MacArthur Honor Guard in postwar Japan. I'm not sure what camera he was using, but some of the pictures might be a bit out of focus.
Posted by Jonathan Benda at 9:06 PM No comments: