My son and I had some time this morning while my wife was teaching in Quincy, and I had seen something about the Granite Railway Incline Plane on Atlas Obscura, so we decided to check it out.

As they say on the website, the railway ruins are located in a neighborhood near the highway. Google Maps took us right there. 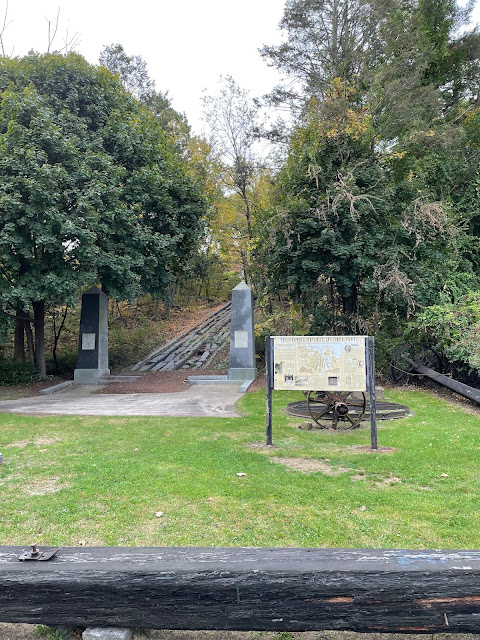 Entrance to the Granite Railway Incline 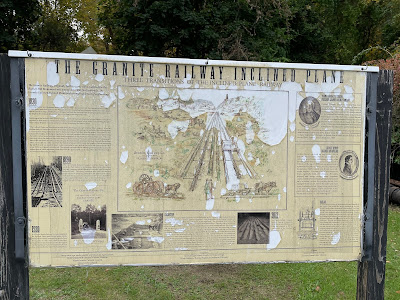 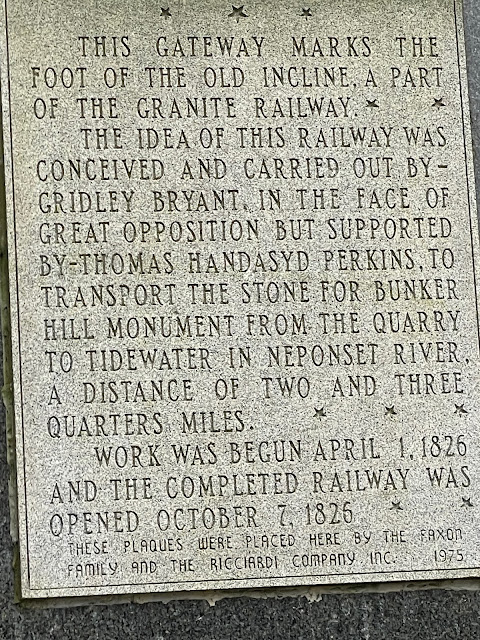 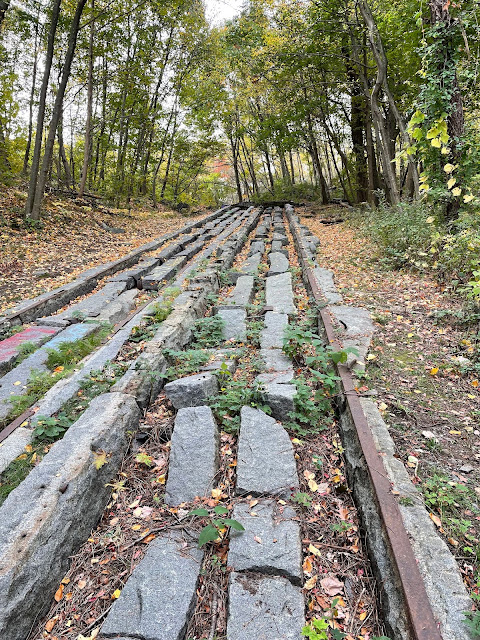 Looking up the incline from the bottom of the hill 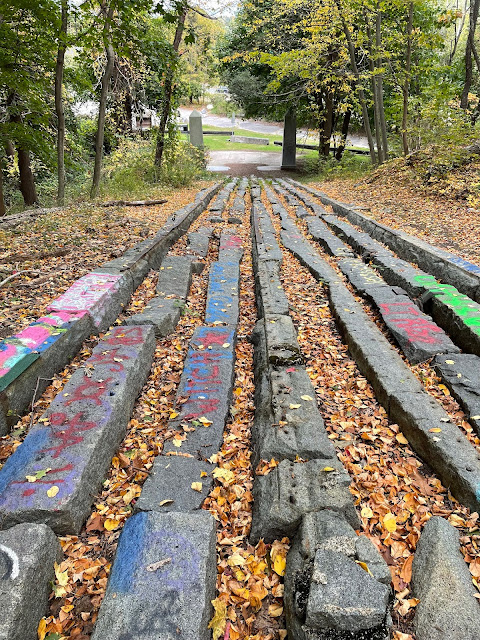 Looking downhill from near the top
When we got to the top, we walked for a while along a pathway for awhile. We came through the woods to a clearing and found out we were in the middle of an old quarry (see this description on Atlas Obscura).
The scene from the clearing (apologies for the jerky video!)
The little guy, running as usual
View from the top of the quarry
As we were leaving, we ran into a group of men who were headed into the quarry from another direction. They were either going to film something there or play musical instruments (one guy had drumsticks, I think), or maybe they were going to film themselves playing musical instruments. We didn't hang around to see what they were up to, though. (Maybe we should have!)
We'll have to go back sometime, perhaps before it gets much colder out.
Posted by Jonathan Benda at 1:20 PM No comments:

A belated RIP to Gary Blankenburg

My brother sent me Gary Blankenburg's obituary this evening. Dr. Blankenburg, who died last year, was a poet and high school creative writing teacher who could be said to be the reason I'm a college writing teacher. (In my darker moments I'd say he's partly to blame for my career...) I didn't go to Catonsville High School where he taught, but I met him through my brother, who worked for Dr. Blankenburg's wife Jo at a Waldenbooks  (remember those?) in Towson. At the time, I thought I was a poet, or I was trying to be a poet, and I must have run into him at one of the Maryland ArtScape literary festivals--I went one year when a young poet named Millie Bentley (a former student of his), who had just published a chapbook, gave a reading. This article from the Baltimore Sun gives a better review of his career than I could.

When I was a freshman in college, I started out majoring in communications, and a professor in my introductory class assigned us the task of interviewing someone in the career we'd like to have (presumably in communications). I thought I wanted to be a career poet, so I got my brother to ask his boss to ask her husband if I could interview him. We met at an IHOP one evening, where he drank coffee and I drank tea, and he told me that if I wanted to be a writer, I should become a college professor. High school English teachers, he explained, don't have time to write because they're spending all their time grading papers. But college professors, they have time to write. I guess that started me on this track. I've discovered, though, that "having" time to write and "making" time to write are two different things. He seemed to make time, which I haven't been as good at doing.

A few years after that interview (can I call it life-changing without sounding maudlin?), Dr. Blankenburg generously published a couple of my poems in the Catonsville Times (hopefully copies of that issue are lost to history) and invited me to give a reading to his creative writing class at Catonsville. I think my reading was terrible, and I couldn't really answer any of the students' questions about writing poetry. I never thought of it until now, but I guess I can say that was my first time in front of a writing classroom. Not a very auspicious beginning, considering my performance, but I would like to thank Dr. Blankenburg for the opportunity. He took my writing and career aspirations seriously, even though I was probably taking them too seriously at the time, and based on that Sun article, that was typical of him. A generous man. Rest in peace, Dr. Blankenburg.

Posted by Jonathan Benda at 11:06 PM No comments:

Trying to decide if I should submit something to this. Due date: Oct. 20:

The University of Washington Taiwan Studies Program (UW-TSP) will host the 4th World Congress of Taiwan Studies from June 27 to 29, 2022.  The quadrennial conference is jointly organized by Academia Sinica and UW-TSP. The WCTS brings together the world’s leading Taiwan Studies scholars to share their research. The 4th Congress will pursue the general theme “Taiwan in the Making,” exploring the processes, forces, and dynamics that made and continue to make Taiwan.

We are now circulating our Call for Papers. We welcome applicants to propose research papers on Taiwan from the social sciences and humanities. The Congress will highlight a number of sub-themes throughout various panels and roundtables, such as (but not limited to):

These topics are merely examples, and we encourage applicants to submit applications in any field or area of focus broadly under Taiwan Studies.

Please submit a one-page long abstract (no more than 600 words) and include the following information: Author(s) Name, Paper Title, Email, Current Position(s), and Affiliation(s) to: [twstudy@gate.sinica.edu.tw]

For junior scholars (PhD candidates, postdoctoral fellows, adjunct faculty, and independent scholars) who do not have access to institutional funding, the WCTS may be able to offer a modest, partial subsidy toward airfare. Details will be arranged after proposal acceptance.

Please refer to the WCTS webpage for further details.

Posted by Jonathan Benda at 9:59 PM No comments:

One Marine's War and the Robert Sheeks-George H. Kerr connection

I got curious about Robert Sheeks because of some correspondence he had with George H. Kerr over some materials he was helping Kerr transfer to the Shikiya Memorial Library at the University of the Ryukyus in 1958. The Asia Foundation, for which Sheeks worked, was in charge of purchasing the collection on behalf of the University. This correspondence is located in the Kerr collection at the Hoover Institute. (My thanks to Dr. Yukari Yoshihara of the University of Tsukuba for sharing these documents with me!)

Also in the Kerr papers is a note from "rbs" (probably also Robert Sheeks) to "Mr. Stewart" regarding a 1955 letter to the editor of the San Francisco Chronicle in which Kerr traced a history of US-Taiwan-Chinese relations up to that time and predicted "a violent crisis within Nationalist ranks at Taipei" that the US needed to be prepared for. In his note to Stewart, RBS characterized Kerr's letter as "a wonderful gift to the communists." He continued,

His bitterness has grown, as much because the Department of State did not take his advice as for [sic] reasons connected with the uprising and its violence. Aside from this increased bitterness, he is back in Formosa of 1947 --- as he happened to view it in those days. He viewed everything for the I.P.R. at that time.

Kerr is supposed to be a scholar; he has the whole Hoover Library setup at his disposal. He omitted mention that Formosa was ceded to Japan as part of the spoils of the Sino-Japanese War.  I am sure that this is intentional, and it helps paint the kind of picture he wants to portray of the Formosan, Mainlander, and Japanese roles.

Incidentally, Art Goul [a reporter who worked in China and Taiwn] phoned me this morning to ask about Kerr's background. I gave him a few items of past history which are fairly well known.

I am curious about the "items of past history" that RBS told Goul about, of course, so I looked up Sheeks and came across this website about him. (I should note that Dr. Stephen Craft of Embry-Riddle Aeronautical University told me about Sheeks and the website several years ago, but for some reason I never followed up on that, which will probably be to my eternal regret.) Anyway, the website about Sheets got me interested in the book about him by Gerald Meehl, One Marine's War, and I just finished reading it today after receiving it yesterday. (It's a quick read.)

The book mostly focuses on Sheeks' career as a Japanese Language Officer (JLO) during World War II and his attempts to convince the Marines to let him try to persuade Japanese soldiers and civilians who were holed up in caves on the islands where the Marines had landed to give themselves up rather than fight to the death or commit suicide. It's a fascinating story, but there was only a little in the book about his postwar years, including his time in Taiwan as director of the United States Information Service. That's what I'd like to know more about, as well as his work for the Asia Foundation in the 1950s. Well, I can't criticize a book for not covering what it wasn't intended to cover! Maybe I'll try to contact Sheeks now and see what he can tell me about his experiences in Taiwan (and about his memories of Kerr).

Posted by Jonathan Benda at 10:27 PM No comments:

I'm listening to workmen playing Steely Dan and tearing out some rotten wood from the soffit. ("Soffit" is a word I just learned a couple of weeks ago from my 94-year-old mother.)

[Update, 9/29: They're now playing the Eagles, interspersed with other music primarily from the '70s. Still some Dan in the mix.

When I was in college in the '80s I was amazed at one administrator's knowledge of the music of the '50s. Now I'm in that administrator's position regarding music that's almost 50 years old rather than "only" 30 years old. Yikes.]

Posted by Jonathan Benda at 6:34 PM No comments:

How do you write about the cool things you've found in the archives without making your paper sound like it should be titled, "Cool Things I Found in the Archives?"
Posted by Jonathan Benda at 10:59 PM No comments:

We had a virtual English Department meeting today. After we got off Zoom, we all ran into each other on the way to the restroom.
Posted by Jonathan Benda at 10:28 PM No comments: