We found, for instance, that if I said, "My uncle is a farmer", students felt a need to specify in their minds whether that uncle was on my father's side or mother's side, and whether the uncle was older or younger than my parent. (Some students automatically thought in terms of a father's brother, but one student said she was closer to her mother's side of the family, so thought in terms of a mother's brother.) Students were also a bit surprised when I suggested that if I said the same sentence to a native speaker of English, that person might (but probably wouldn't) ask if I meant my father's or my mother's brother, and most likely wouldn't wonder about whether or not the uncle was older or younger than my parent.

The powerful role of kinship terms is also discussed in "The Cultural Connotations and Communicative Functions of Chinese Kinship Terms" (American Communication Journal 3.3 [2000]). Shaorong Huang and Wenshan Jia argue that there are three main communicative functions served by kinship terms in Chinese:

I'm not sure I agree with everything they say in this article (for instance, they imply a uniqueness for the Chinese family system that I'm not sure about--our textbook suggests that Indian kinship terms are also quite complicated). But the points I cited above extend what we were discussing on Thursday about how kinship terms fit into both the naming and the interactional functions of language.

(cross-posted, with slight adjustments, to the ICC course blog)

Posted by Jonathan Benda at 12:29 PM No comments: Links to this post

Looks like Minquan Road, Lane 237 (民權路237巷) is now Dahe Road (大和路). Anyway, that's what the clerk at the check-in desk at the Yadian Commercial Hotel (雅典商務旅館) on 3 Dahe Rd. told us. (She was very helpful even though we didn't want a room.)

So from what we could gather, the Japanese-style house that used to be at No. 7 is now this: 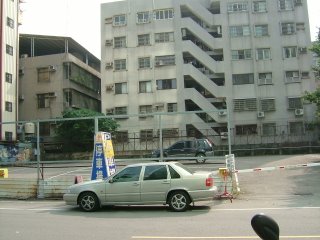 (Note to self: one of these days I ought to standardize my romanizations...)
Posted by Jonathan Benda at 3:33 AM 2 comments: Links to this post

Texas Tech University houses the largest Vietnam Archive in the United States, and West Texas has been home to thousands of Vietnamese/Asian Americans. Late spring in Lubbock is usually mild and sunny.

With great progress in technological innovation and economic development in China, India, and other Asian countries in recent decades, the twenty-first century has increasingly been identified and envisioned as "the Asian-Pacific century" or "the Chinese century" in the global media. What political and cultural implications does this new construction of Asia generate? How will these revitalized Asian nation-states articulate their own desires and reposition themselves in the context of the U.S.-centered global order? How will the United States redefine itself in relation to the rise of this new Asia? What lessons has the United States drawn in its political, economic, cultural, and military encounters with these Asian nation-states since the late nineteenth century?

This symposium looks for papers that will engage these challenging questions and theorize their complexity and historicity in both the Asian and North American contexts. We not only welcome proposals that examine the construction of Asia in terms of space production and reconsider Asian America as a process of racial formation, but we also encourage projects that investigate ways in which information technology, trans-Pacific movements, as well as Asian language communication may impact the futures of both Asia and North America.

Possible topics may include but are not restricted to the following:

--Modernism and the Literary Representation of Asia

--The Cold War and the Cultural Imagination of Asia

--Cyberpunk Fiction and the Reinvention of Asia

--Sex, Violence, and Fantasy in the Japanese Manga and Anime

--From Hollywood to Bollywood

--The Discourse of "Human Rights" and the Re-construction of Asia

--War, Empire, and the Global Market

You may email your inquiry, proposal, and C.V. to Dr. Yuan Shu at (yuan.shu [at] ttu.edu).

Email ThisBlogThis!Share to TwitterShare to FacebookShare to Pinterest
Labels: CFP

Ever since I bought Ellen Johnston Laing's Photographs of Taiwan During the 1960's, I've been interested in finding the area of Taichung where she lived when she was studying at Tunghai. She mentions having lived in "a pleasant Japanese-style house at number 7, Lane 237, Min-ch'uan Road" (28). This was as close as I could find to that address--I couldn't find a Lane 237 on the map. (Thanks to Kerim for the heads up about UrMap!) I can find a Lane 233 near the intersection of Minquan and Zhonggang Roads, but the next Minquan Road Lane xxx is Lane 359, near the Science Museum. So I guess Lane 237 got renamed or built over at some point. [Update, 11/17/06: I Googled 民權路237巷 and got some results for some companies on that lane, so I guess it still exists! Just doesn't show up on the map. Maybe it's too small. Off to check tomorrow... will bring my trusty camera.]
Posted by Jonathan Benda at 12:38 PM No comments: Links to this post

Did Chen mention Taiwanese independence in his speech?

Acknowledging the damage to his presidency and to the cause of Taiwanese independence from China, as well as the disappointment felt by many of his followers, Chen apologized both to the Democratic Progressive Party and to inhabitants of the self-ruled island in general. (emphasis added)

Did I miss something? Did Chen mention the cause of Taiwanese independence from China in his speech? I can't find anything about it in this Chinese transcript, either.

It doesn't surprise me that the Post would misrepresent Chen's speech in this way, though. As Tim mentioned, they got all bent out of shape over Chen's use of Taiwanese. (So did the other Post, which accused Chen of "ignor[ing] the foreign journalists and most TV audience to use mostly the southern Fujianese dialect (prevalent in a southern China district) to cater his remarks to his own supporters in southern Taiwan" (emphasis added). I think the words they use to describe Taiwanese are quite... ummm... interesting. They're really emphasizing the mainland-Chineseness of the Taiwanese language, aren't they? I'll agree, though, that Chen was speaking more to his supporters than to anyone else...)
Posted by Jonathan Benda at 1:02 AM 3 comments: Links to this post

[Corrected version] In less than 8 hours, I shall be celebrating Tunghai University's 51st year by engaging in the grand ritual of gripping a tennis ball with chopsticks, running 20 meters with them, then dropping the tennis ball into a bucket before passing the chopsticks on to another celebrant. You're not allowed to use your hands--if you drop the tennis ball, you have to pick it up with the chopsticks. When the department chair asked me to take part in this important event, I tried to tell him that I was not worthy, but it was to no avail.

And no, I am up at this hour not because I don't take such an august activity seriously... what would make you say that?

[Update, 11/3/06] Well, I survived the Sports Day activities. I ended up taking part in two events because there weren't enough faculty and staff from the College of Arts (where were you guys?). The first event is too hard to describe, but suffice it to say that Mr. Bean-like, I managed to trip my teammate during that activity...

On the other hand, I received praise from several people after the chopsticks-carrying-tennis-ball event. Unlike a lot of people, I didn't drop the tennis ball at all. (Of course, I was also probably the slowest tennis ball carrier in the event...)
Posted by Jonathan Benda at 1:17 PM No comments: Links to this post