Or maybe I'll just make my own donuts...

I would be remiss not to mention this...

Dunkin' Donuts has arrived in Taiwan. (And I just went to Mr. Mister Donut for the first time last Sunday. I'm so out of style.)

It sounds like the Taiwan stores will also offer the ham, egg, and cheese breakfast bagels that helped me face those awful Syracuse winters...

Email ThisBlogThis!Share to TwitterShare to FacebookShare to Pinterest
Labels: donuts

We had some time off yesterday, so we took the High-Speed Rail (HSR) to Taipei yesterday. We could only get a one-way trip, and we could only get seats on the 7 o'clock train. But that turned out to be OK. 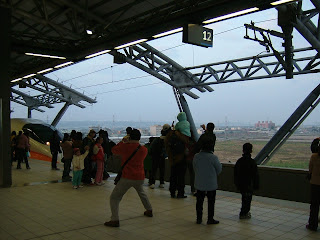 People like to take pictures when the train is coming. Here's one guy trying to fit in his family and the train. I love that photographer's pose. Looks like he's in training for the next Matrix movie....

The trip was smooth and quick--we left right at 7:00 and arrived in Banqiao (or "Banciao", as they write it) 53 minutes and 25 seconds later. (In contrast, the bus we took from Taipei to Taichung last night took about 2 hours--and I think the driver was speeding the whole way.)

We spent the morning at the Taipei 228 Memorial Museum. Quite a sobering experience. (There's also a "virtual museum" that contains a lot of the pictures that are on display at the museum. Unfortunately, it's only available in Chinese.)

Coming back to Taichung, we felt kind of jealous of Taipei's MRT system, though we know how much people in Taipei suffered during the construction of the subway. But we're hoping to see something like it in Taichung one of these days...
Posted by Jonathan Benda at 3:18 AM 1 comment:

To finish my dissertation before my fortieth birthday. (Let's see, that gives me about 31,449,600 seconds, give or take.)
Posted by Jonathan Benda at 10:59 AM 7 comments:

It was almost like a birthday present (except that I paid for them...). This afternoon I got a box from Labyrinth Books, containing the four books that I ordered in November. They are all hardbound books, but only one (the Luce book) has a dust jacket. But three of them were less than US$10 each, and the last book was only $15. Not a bad deal...

Posted by Jonathan Benda at 10:50 AM 2 comments: Links to this post

Email ThisBlogThis!Share to TwitterShare to FacebookShare to Pinterest
Labels: books

It's the week that all the first-year students take their English oral final exams here. Walking around the building, you can see students standing all over, holding papers and mumbling strange words to themselves. It's times like these that I begin to think I'm actually teaching at Hogwarts.

One of my first-year students just used "vouchsafe" in her oral test, and another used "artifice." Either I'm doing something right, or their electronic dictionaries are working overtime...
Posted by Jonathan Benda at 1:52 AM 1 comment: Links to this post

Back to the archives

I just read Christopher Phelps's (or is it Christopher Phelps'?) column in the Chronicle about his dream archive. Some points to remember before I dig around in the Oberlin archives this winter break (or that I wish I had thought of last time I was there, so I wouldn't have to dig around in the archives this winter break):
Hmmm... that's only one point. Well, it's important enough that it should be more than one. For some reason, during my last couple of trips to the archives I was particularly parsimonious with the copying. I don't know what I was thinking. Now I have to fly halfway around the planet to do what I should've done the first time. And without a grant. (Hmmm... maybe I should set up a donation box. Wait a second...)

Email ThisBlogThis!Share to TwitterShare to FacebookShare to Pinterest
Labels: research

My colleague Douglas informed us about an organization he's involved with called Taichung People Animals Welfare Society (Taichung PAWS) that has begun recently. Here's an introduction from the organization's website:

They're holding an event from 1 to 5 p.m. on Saturday 1/13 at the Our Home Cafe near World Gym. (Here's a map.) More details here.
Posted by Jonathan Benda at 10:26 PM No comments: Links to this post

Three books the former native speaker wishes were in his library, but is content (for now) to borrow from someone else's library

During an online search this past weekend for materials related to Vern Sneider's A Pail of Oysters, I came across a reference to some letters that he exchanged with George Kerr, author of Formosa Betrayed. Some images of those letters are available online via the National Repository of Cultural Heritage, but I also found out that the 228 Museum in Taipei published a 3-volume set related to Kerr:
I found out that Tunghai's History Dept. library had these books, so I borrowed them today. Talk about fascinating stuff to curl up with on a cold winter night. There are all sorts of interesting topics that come up in the letters--discussions with (and about) Thomas Liao (a Taiwan independence activist-in-exile who eventually returned to Taiwan in a propaganda coup for the KMT), letters in response to Formosa Betrayed and concerning the trouble he was having publishing a history of Taiwan to 1945, discussions regarding the assassination attempt on Chiang Ching-kuo in 1970 and its aftermath... Just a lot to keep a curious reader busy. These were published in 2000--I'm a little embarrassed it has taken me so long to come across them.
Posted by Jonathan Benda at 11:26 AM No comments: Links to this post

Didn't realize they were so healthy...

BBC News reports that Momofuku Ando, the Taiwan-born Japanese inventor of instant noodles and founder of Nissin Food Products, has died at the ripe old age of 96. Notable is the fact that, according to the BBC, Ando "often ate his company's instant noodles." Guess Nissin really produces "long-life noodles"...
Posted by Jonathan Benda at 2:38 PM 2 comments: Links to this post

It's windy this evening, so I wore my favorite baseball cap when I went out for a quick walk: 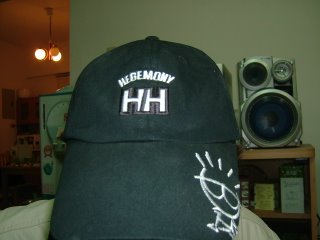 I get a strange feeling of power whenever I wear it. (Unfortunately, it didn't stop the guy in the SUV from almost running me over. Guess that's another example of the material world trumping language.)
Posted by Jonathan Benda at 5:01 AM 2 comments: Links to this post

We've been going to a certain restaurant in Taichung for a couple of years, and I always found amusing a sign that is stuck on the door of a stall in the men's restroom. It's in the stall where the "squatter" toilet is located. Well, this time I happened to have my camera with me, so I took a picture of the sign: 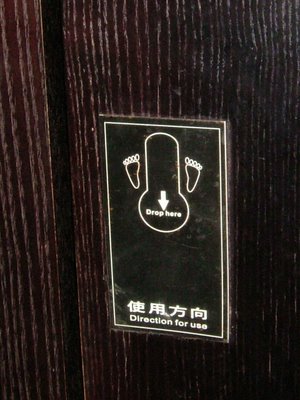 Now I don't teach technical writing, but it would be interesting to do some usability testing on these instructions. (Would people think that they had to take off their shoes before "dropping"?...)

I had a little trouble getting a clear shot because the sign kept reflecting the light of the flash, so I tried a couple of times until I found that standing at an angle and using red-eye reduction made for a pretty clear picture.

It was at about this point that I also realized that if anyone had come into the restroom and seen multiple flashes coming from inside one of the stalls, I'd have had a bit of explaining to do... Guess I could have told them I was 閃電俠 (the Flash)...

(Remind me to get a picture of the other sign--the one that contains the words "Memento excrementi"*--some time.)

*Sounds like a great title for a blog, doesn't it?
Posted by Jonathan Benda at 11:25 AM 4 comments: Links to this post