Liked this one when the former native Chinese speaker (why do I still call her that?) told it to me long ago. This version is updated to 2000:

Posted by Jonathan Benda at 9:22 PM No comments:

The fifth "John" who lost China

This is an old joke that people more educated about US-China relations than I am probably all know, but I got a kick out of it. In a review of John Paton Davies' autobiography, Roderick MacFarquhar writes,


In the 1950s, the late John King Fairbank, the dean of modern China studies at Harvard, used to tell us graduate students a joke about the allegation that a group of red-leaning foreign service officers and academics—the four Johns—had “lost” China: John Paton Davies, John Stewart Service, John Carter Vincent, and John King Fairbank himself. What the McCarthyites had forgotten, Fairbank said, was to finger the fifth “John”: John Kai-shek.

Posted by Jonathan Benda at 9:14 PM No comments:

Another addition to the former native speaker's library

(I'm not sure why I'm still calling myself "the former native speaker...") 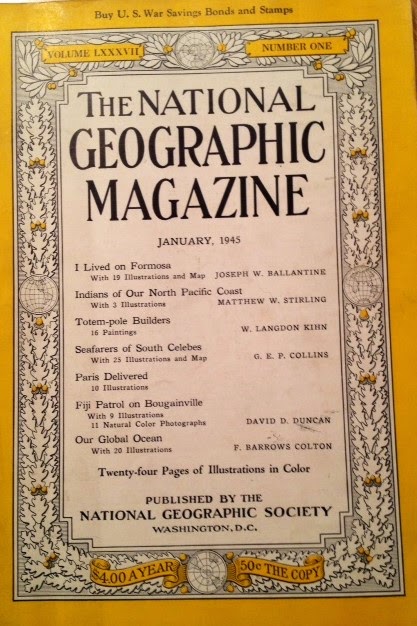 The reason I bought this old copy of National Geographic is that it includes an article by Joseph W. Ballantine entitled "I Lived on Formosa." Ballantine later wrote Formosa: A Problem for United States Foreign Policy as well as a book on speaking Japanese.

I looked around on the web to find out what I could about Ballantine. According to the dust jacket of his book, he was in charge of the American Consulate in Taiwan in 1912. Other sources mention that he was born in 1888 in India, so that would mean he went to Taiwan when he was 24. According to this source, though, Ballantine was a Vice and Deputy Consul in Taiwan from 1912-1914.

I came across this paper written by Richard Bush last year; part of it discusses Ballantine and, interestingly, also starts out with Bush's discovery of the National Geographic article. 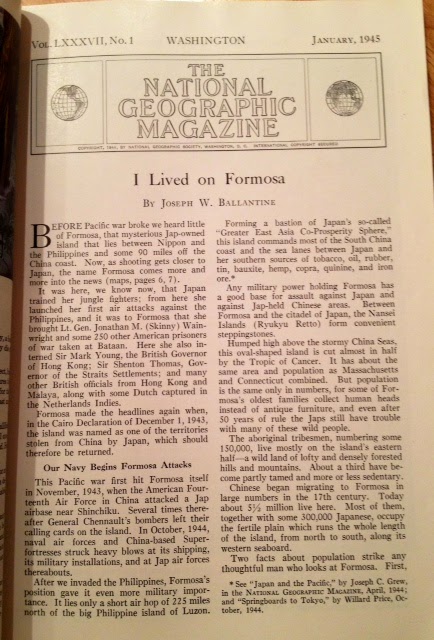 "I Lived on Formosa" introduces Taiwan in the context of the island's role in World War II, mixing descriptions of the island, its products, and its population (including its "fierce head-hunters") with depictions of US bomber attacks on airbases, a list of some of the POWs held on the island, and speculation about the potential for using Taiwan as a steppingstone to Japan. (If you haven't heard of the POW camps the Japanese had in Taiwan, here's a link to a memorial website with details.)

Besides that, two themes stand out in Ballantine's article. One is how badly the Japanese treat the Taiwanese, and how much the Taiwanese are looking forward to getting out from under "the heavy yoke" of Japanese rule and "reunit[ing] with their fellow Chinese of the mainland." Because he spoke Japanese, Ballantine writes, "I soon saw with what harshness and contemptuous arrogance the Japanese regarded and treated the subject Chinese." Later on, he writes that "Jap policemen have long arms, regiment the populace, pry into everybody's private affairs, interfere with religious services, teach school, and even try to control the thoughts of the people. Prevention and detection of crime with them are merely incidental functions."

Another theme concerns the lack of Westerners in Taiwan. He describes a "secluded" life with other Westerners, noting that in the winter, "often we were unable to get together even a quorum for bridge." A subheading in the article announces, "Few Europeans Ever Lived Long on Formosa." In Ballantine's defense, it's likely he didn't write those subheadings, but he does write that "no white man's venture here ever lasted long" without mentioning Canadian missionary George Leslie Mackay, who lived there for almost 30 years.

Finally, there's a certain quality of timelessness to Ballantine's article--the sense that he is describing in present tense scenes he witnessed and  people he met decades earlier. Indeed, I haven't found any evidence that he spent any time in Taiwan after 1914. Yet none of his stories of meetings with Aborigines or discussions with Japanese officials, etc., indicate when they happened. It is as if nothing (except for the war) has changed Taiwan in the three decades since Ballantine lived there.

(I see there's an interesting book entitled Presenting America's World: Strategies of Innocence in National Geographic Magazine, 1888-1945, that might discuss this kind of thing.)
Posted by Jonathan Benda at 11:46 PM No comments:

Here's a poem I wrote about Uncle Erich back in 1985 after I spent a summer in Allentown living with the Salomons and working at Salomon Jewelers:

Posted by Jonathan Benda at 2:12 PM No comments: 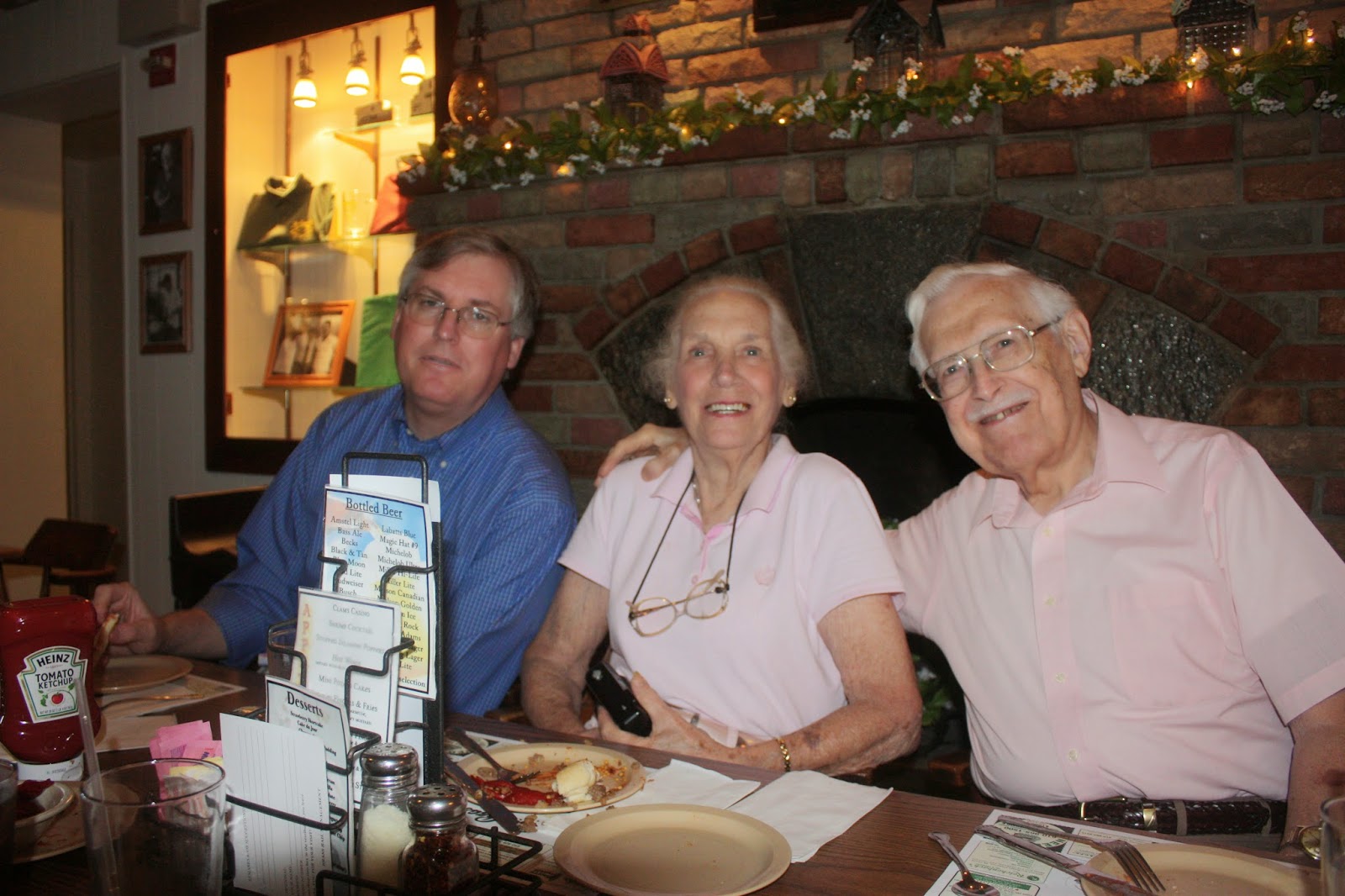 Here's a picture of Uncle Erich (right), Aunt Lucy (with whom he recently celebrated his 60th wedding anniversary), and their son Erich Salomon II (Rick).

Here's a newspaper article that was written in 1990 about their family business in Allentown. (I'm going to paste it here in case it disappears from the website.)

Erich E. Salomon, 70, is a watchmaker and clockmaker in that order.

His brother Gerhard, 64, is a clockmaker and watchmaker, with his skills in clocks.

In their father's day, these were jobs in which the master craftsman actually made the watch and the clock. Today, they mean repair and restoration, which sometimes includes making parts.

"We get some basket cases," Erich notes.

Both men have been in these crafts for more than half a century in downtown Allentown. And both lament they are in dying trades.

Erich digs out a trade magazine to show a help-wanted ad for a watchmaker at up to $1,000 a week.

To further prove the point, the Salomon brothers note that Erich's son Rick at 32 is one of the youngest watchmakers in Pennsylvania.

When Rick trained in the mid-1970s at Bowman Technical School, Lancaster, the oldest watchmaking school in the country, there were 25 in the program. The latest class had three.

Gerhard's three sons didn't want to go into this work.

For the Salomons, the family business started with Ernest Salomon, Erich and Gerhard's father, in Germany. Ernest was a master clockmaker and watchmaker, going through a four-year apprentice program and building a clock from scratch to complete the training.

That clock still hangs in the shop.

Ernest had his own jewelry store for 17 years in Germany. Then, he and his wife, Emma, and their two young sons came to America and to Allentown in 1928.

For a brief time, they lived near the top of the Lehigh Street hill. Then, the Salomons moved into the third floor of 606 Hamilton St. The Ebbecke Hardware Store was on the first floor.

Ernest worked for three years for Faust & Landes Jewelry Store, 728 Hamilton St., Allentown, until he was cut to one day a week because of the Depression.

He told landlord John Ebbecke that he was going to move because he couldn't afford to pay the rent.

Ebbecke said, "I don't want you to move. Start in business for yourself. I'll see that all my friends will give you work."

So in May 1931, Ernest Salomon opened his shop on the second floor at a workbench he brought from Germany, the same one Erich uses today.

"There was no lease. It was just one of those gentlemen things," Erich says. "When we could afford to, we started to pay."

Erich, then about 12, served as a translator for his father with the customers. He wrote orders. He learned the trade -- at no pay -- as did Gerhard a few years later.

Gerhard laughs, "When you worked at home, you didn't get paid."

For money, Erich at 14 got a job Saturdays at Allentown's Center Square Market, selling butter, eggs and cheese.

Gerhard delivered newspapers and worked for a news dealer at 7th and Hamilton streets in Allentown. He made $25 one summer in the late 1930s.

Their father died in 1940, with $35 in the kitty. They decided to continue the business. Their mother, a seamstress, pretty well controlled the purse strings.

"I saved some money and bought some watches," Erich says. "Little by little, the business grew."

The partnership worked. And after each married, the spouses also became a part of the business -- Erich's wife, Lucy, working behind the counter and Gerhard's wife, Dolores, serving as bookkeeper.

Ebbecke died in the early 1940s. But his hardware business continued until October 1966. Then, the Salomons moved to the first floor.

"We were here six months before we signed a lease," Gerhard says.

Ebbecke's son-in-law, attorney Charles Helwig, told the Salomons he wanted them to have the building. In 1974, just before Helwig died, the sale was completed.

The store has 150 working clocks, including 25 grandfather and 40 cuckoo. The striking of noon is a noisome event.

Rick and Gerhard are the partners now. Erich had to step aside at 65 so he could collect Social Security. So his son is now his boss.

Rick says many old family jewelers have done so well that they've educated their children out of the business -- to be doctors and lawyers.

But he says there's a real satisfaction in this craft, despite the long hours, especially in fixing a watch or clock after a customer comes in and says, "I've had this all over the place, and no one wants to touch it."

Posted by Jonathan Benda at 12:38 PM No comments:

Email ThisBlogThis!Share to TwitterShare to FacebookShare to Pinterest
Labels: life

Thoughts about this blog and other things

So after coming up with this cool (well, at least in my view it's cool) new title for my blog, unfortunately I haven't made much use of it. Part of the reason is that I've been really busy with teaching and writing for conference presentations (did one in March and one in April and was supposed to do another in June--did it virtually); another part is that I've been spending more time (too much time) on Facebook (I'm trying to cut down on that--haven't checked FB in about 3 days now). And I've been working on some other projects and also trying to figure out what I should be doing in terms of writing.

So I've sort of felt that if I wrote in this blog, I'd be taking time away from writing other stuff--as though I have a limited number of words and shouldn't waste them. But the problem is that if I'm not writing here, that doesn't mean I'm necessarily doing any productive writing elsewhere. (Half my journal lately has been full of self-loathing over the fact that I'm not getting any productive writing done.) My other concern was that I didn't know what to write about in this blog. But I'm not entirely sure I should be worried about that, considering I'm probably the only person reading it.

In other events, I've had two uncles pass away since January. One died in January at the age of 93, and another passed away this morning at the age of 94. I know I wrote a poem a long time ago about the uncle who died today. I don't have a copy on me, but I'll see if my mother has a copy and if so, I'll post it later.
Posted by Jonathan Benda at 2:53 PM 4 comments:

http://www.soas.ac.uk/taiwanstudies/events/18jun2014-roundtable-on-taiwans-sunflower-social-movement-causes-strategies-consequences-and-compari.html
Posted by Jonathan Benda at 5:31 PM No comments:

"A Buried History of Taiwan"
Posted by Jonathan Benda at 4:56 PM No comments: